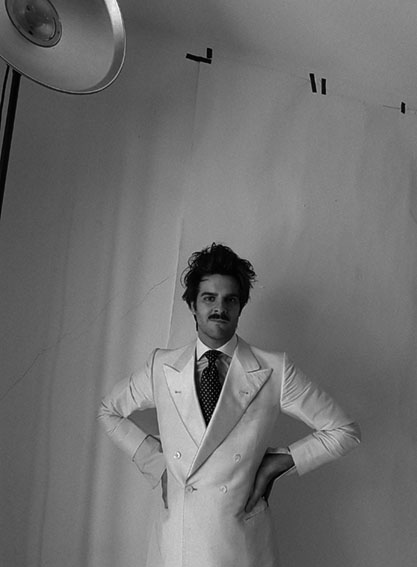 Ernesto Artillo is an Andalusian artist interested in gender, identity in social networks, human being as an advertising medium, certainties and other forms of love. Photography, collage, video, costumes, scenography, installation or performance are some of the multiple disciplines in which his work is embodied, all with an unique personal style. @ernestoartillo

The dichotomy between his commercial and personal production has been an important axis in his career until he managed to make his clients patrons of his own artistic concepts. He has collaborated with brands such as Dolce & Gabbana, Delpozo, Adolfo Dominguez, Loewe perfumes, Harvey Nichols, Pepe Jeans, Printemps Paris, Lane Crawford Hong Kong and Shiseido among a long list ...

In 2018, Ernesto Artillo creates his feminist artistic project "My Outer Woman", a work of conceptual intervention materialized in suits to show off the feminist certainties, with a great international impact.

He has carried out the direction of art, costumes and set design of “La Mujer en Obras” by Javier Ballesteros, among other representations, where he invites to a reflection on the elements that attract and repel him the most of the traditional feminine imaginary, Human of Korsía or the opera Aria di Potenza of Airport Society and several collaborations with La Monnaie, opera of Brussels.
‍
Saint Petersburg, Mumbai, Korea, Beijing, Hong Kong, Mallorca, Valencia, Madrid, Barcelona, Seville and Málaga are some of the cities where he has held solo and group exhibitions. Headers around the world collect his publications; Another Magazine, Harpers Bazaar China, Citizen K Paris, Glamor Spain and Italy, Elle UK and Elle Mexico, Instyle UK, Manifesto, Vogue Spain, as well as most of the national independent media. His works can also be seen in numerous illustration books and editorial design from different countries.

The taste of Ernesto Artillo for working with issues that concern us all is unquestionable, what has been reflected in Lovisual Art Festival 2018 with "Lo Que Se Lleva", where he reflects on what we do not want to see, or in the urban installation "Gazes of Women" located in one of the main streets of Málaga that claimed the feminization of society through 100 large-scale women's gazes hanging in the air.

In the evolution of his career path, Ernesto Artillo pursues that his work has a conceptual importance, for that reason he claims the words as a fundamental part of his images. His artistic projection is aimed at materializing his performative concerns making presence a new way to investigate his humanist stories.